January 2021 Member of the Month 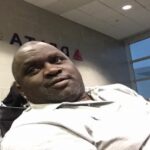 Terry Cornell Richardson served in the U.S. Navy from 1989 until 1992. Originally from Courtland, Mississippi, but now residing in the Mississippi community of Olive Branch, Terry has been a BVA member for the past seven years. For two of the seven years he has served as treasurer of the Tennessee Regional Group. Terry participated in the Operation Peer Support sponsorship program to a BVA national convention and now diligently assists the veterans of his group with assistive technology training. He is the Associate Minister for Pope Chapel A.M.E. Zion Church. Aside from spending time with his wife, Virginia, and two daughters, Angelica and Ashlee, Terry in his spare moments enjoys walking, playing both goal ball and bocce ball, and listening to books from the National Library Service’s Braille and Audio Reading Download (BARD). CONGRATULATIONS, TERRY RICHARDSON, AND THANK YOU FOR YOUR CONTINUED SERVICE!