September 2020 Member of the Month 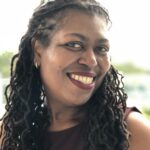 Ms. Yonaka Trent is an United States Army veteran who served eight years as a Military Policewoman. Yonaka’s duty stations consisted of the following: Fort McPherson, Atlanta Georgia, Hunter Army Air Field Savanah Georgia, Kelley Barracks Stuttgart Germany, and Kaiserslautern Germany as a Military Customs Inspector.  Currently, Ms. Trent resides in Clayton North Carolina where she is loved by her two children and five grandchildren.  Ms. Trent joined the BVA this year and is an asset to this organization.  Ms. Trent’s positive energy and willingness to work with the group has created a greater enthusiasm for ongoing BVA projects. Yonaka hobbies consists of the following:  Archery (she has received a gold medal at the Valor games), Cycling, Bocce Ball, and Sitting Volleyball.  Ms. Trent also is the adjutant for the local 504 of the VFW which is the only female VFW organization in North Carolina.  THANK YOU FOR YOUR CONTINUED SERVICE AND CONGRATS!