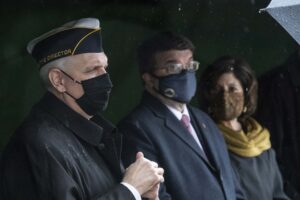 Looking back, the November 11 activities to be coordinated by BVA among more than two dozen other members of the Veterans Day National Committee were to very fittingly coincide with the organization’s historic 75th anniversary and a milestone convention slated for the Nation’s Capital three months earlier. The BVA National President would speak to a large gathering in the Memorial Amphitheater. Sitting behind him would be the President or Vice President of the United States, the VA Secretary, and the National Presidents or Commanders of the various organizations that make up the previously mentioned National Committee. In a seating area in the audience, under cover from rain, several members of the BVA Board of Directors would be seated. As the host organization, BVA would be the first to present a wreath at the Tomb of the Unknown Soldier adjacent to the Amphitheater following the ceremony. An hour or so later, BVA would host a formal reception at nearby Fort Myer for VSO leaders, dignitaries, and a few other invited guests.

Although no one could have rightly predicted that such an itinerary could be circumvented so drastically by a virus, a small portion of the ceremony was retained, even in adverse weather conditions. On hand was one representative and a significant other from each organization comprising the National Committee.

On cue, Don welcomed the presidential party to the wreath laying, the one remaining component of the ceremony from the pre-Coronavirus era.

“I was truly humbled and honored to represent my fellow blinded veterans for the wreath laying ceremony at the Tomb of the Unknown Soldier, where it always takes place,” Don stated. “Even with all of the adversity surrounding this event and so many others, the most meaningful things within the cemetery still took place as the President, Vice President, and VA Secretary solemnly recognized and commemorated all veterans who have served in the U.S. Armed Forces through what now spans portions of four centuries.”

The day featured at least one additional similarity to the previous Veterans Day ceremony BVA hosted in 2002: Both days saw steady downpours in both the morning and afternoon. More than two inches of rain fell in the Washington, DC area on Veterans Day 2020, leaving Don and Peggy soaked yet spirited. Interestingly, and courtesy of the November-December 2002 BVA Bulletin, on November 11, 2002 at 5 a.m. the National Weather Service confirmed that heavy rains would drench the area throughout the day with the possibility of tornadoes until 11 a.m., the precise starting time of the ceremony. While the tornadoes were held at bay, the rain predictions came to fruition and a BVA contingency of flagbearers and spectators were soaked that day just as the onlookers were this year.