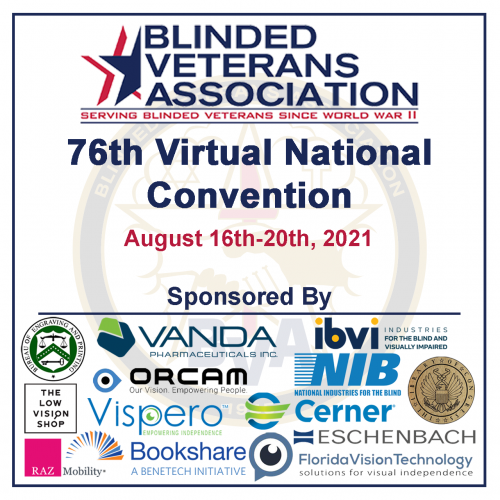 BVA has postponed the traditional in-person 76th National Convention scheduled for St. Louis, Missouri during the week of August 16-20, 2021. A virtual convention will replace the in-person meetings, necessitated by the bylaw requirement that elections for national officers occur every two years.

Procedures for managing the Convention are:

Every BVA Member and Associate Member in good standing shall be eligible to participate in all meetings of the National Convention via a virtual platform. Members may establish an online or a telephone connection to the proceedings. During voting, each member shall be entitled to one (1) vote.

(1)  Members or Associate Members may nominate themselves for candidacy for any National Officer position, up to and including 45 (forty-five) days prior to the start of the Convention (August 16), by writing to National Headquarters (Attn: Administrative Director). The notice must be postmarked no later than twenty-one (21) days before the Convention for it to be considered valid.

(2)  If voting by Proxy, the votes of Members or Associate Members shall be cast by their elected Delegate or the Regional Group President. Such members must request a Proxy Form to be mailed to them by National Headquarters. The mailed form shall be the only Proxy Form recognized by the National Convention and must be returned to National Headquarters (Attn: Administrative Director) with a postmark no later than twenty-one (21) days before the Convention for it to be considered valid and counted.

Roll call voting shall be in alphabetical order of Regional Groups and eligible voting Members. Those eligible to vote are Regional Group Presidents or the elected Delegates voting for their Members, and each individual Member who has registered at least seven (7) days prior to the Convention. Members who have not registered for the Convention may call in as guests but shall not be recognized for voting.

The National Convention Official Notice shall be mailed to each Member and Associate Member in Good Standing, and to each BVA Regional Group in Good Standing, no earlier than one hundred (100) days and no later than seventy-five (75) days before the start of the Convention. Additionally, the Official Notice shall appear in two (2) issues of The Bulletin, in postings on the national website, and in at least one (1) email transmission from District Directors to all Regional Group Presidents.

During the National Convention, fifty (50) percent of the Members and Associate Members who have registered for the Convention, at least three (3) District Directors, and at least three (3) National Officers must be in attendance to constitute a quorum. In the absence of a quorum, the Convention shall have no authority and may transact no business except to adjourn from day to day until a quorum is established.

Credentials certifying to the election of the Regional Group Delegate, accompanied by voting instructions to him/her, shall be in writing, signed by the Regional Group President and authenticated by the Secretary. One (1) copy shall be mailed to National Headquarters (Attn: Administrative Director), postmarked no later than fourteen (14) days prior to the Convention.

Check back regularly for updates.