As we close out a busy and productive year at the Blinded Veterans Association (BVA), our Government Relations Team has secured a legislative victory pertaining to a longstanding issue that has plagued our military health care system for generations—ocular trauma care and care for vision loss due to Traumatic Brain Injury (TBI). A section in the National Defense Authorization Act (NDAA) for Fiscal Year 2022 (FY22), Section 721, mandates the establishment of no fewer than four Regional Ocular Trauma Centers (ROTCs) for the enhanced treatment of ocular wounds or injuries and vision dysfunction related to TBI. These ROTCs will be included under the Defense Health Agency (DHA) and based at Madigan Army Medical Center (Base Lewis-McChord, WA), San Diego Balboa Naval Medical Center, Brooks Army Medical Center (San Antonio, TX), and Walter Reed National Military Medical Center (Bethesda, MD).

Historically, as far back as the Civil War, and more recently World War I, World War II, the Korean War, the Vietnam War, the Gulf War, and now the Global War on Terror, the military has been slow to establish specialty eye hospitals. The result of this reactive approach has resulted in war wounded with ocular trauma injuries not receiving timely and adequate medical care, which often resulted in permanent vison loss that could have been saved had such specialty care been provided in a timely manner.

According to Ophthalmology Times, eye trauma centers improve outcomes for some injuries: “An ocular trauma center is likely to have better patient outcomes than a facility providing a lower level of care… Ophthalmologists rarely need to worry about mortality with eye trauma cases…but they continually face the prospect of poor outcomes in patients who are not treated appropriately in the initial stages of their injuries.” For the war fighter, the only thing worse than sustaining a blinding ocular trauma injury is finding out later that their eyesight could have been saved had they received adequate medical treatment sooner. With the battlefield becoming more dangerous every day, it was critical that DHA establish these ROTCs for enhanced treatment of ocular injuries.

“The establishment of these ocular trauma centers was long overdue, and something should have been done years ago,” said BVA National President Joe McNeil, a former Army officer. “Ocular trauma care is the last thing you think about on the battlefield.”

Traumatic ocular injuries are not usually at the forefront of conversations regarding eye injuries from service, despite their growing prevalence. In 2007, BVA reported that approximately 15 percent of medical evacuations of war wounded in theater had some sort of eye trauma, which is the highest rate of eye injuries of any American conflict. BVA is working hard to secure proactive solutions for our military personnel.

The addition of Section 721 to the FY22 NDAA is a vital legislative victory and will help save the eyesight of future warfighters. BVA would like to acknowledge and thank the persistent efforts of Representative Mark Green (TN), Representative Mariannette Miller-Meeks (IA), and members of the House Armed Services Committee and the Senate Armed Services Committee to ensure the protection of future warfighters.

Contemplating the Meaning behind What We Have Missed 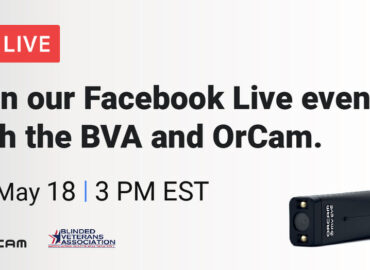