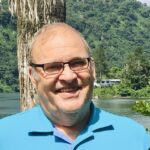 Having enlisted in the U.S. Army in 1968, Abraham Castro-Peña started his first assignment in the Republic of Vietnam. He extended his tours for three years as a helicopter pilot with the 1st Air Cavalry, where he obtained experience and gained long-lasting friendships that he admires. Further in his military career, Castro-Peña confronted medical conditions such as vision loss, which has been the most difficult to accept and adapt to. He is currently receiving treatment at the Puerto Rico Blind Rehabilitation Center, where he has the strong support from the medical team and veterans. He has held the positions of vice president and president of the Puerto Rico Regional Group, rendering excellent work and great dedication in both roles. He is a leader that commands, leads, and supports the Blinded Veterans Association of both the Puerto Rico and the U.S. Virgin Islands Regions. THANK YOU FOR YOUR CONTINUED SERVICE AND CONGRATS, MR. CASTRO-PEÑA!

A Thanksgiving Message from BVA Director of Development Meredith Buono-DaGrossa