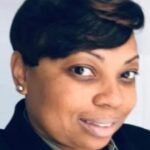 Monaca’s life is a unique one, dedicated to lifting morale and making life better for the hundreds of blinded and visually impaired veterans she leads and represents at BVA.  She listens to them and she understands their challenges.

This is the life and personality of Retired Sergeant Monaca Gilmore, U.S. Army.  BVA’s Director of District 3 and Chairman of its newly established and nationally recognized Women Veterans Group. The Committee that oversees the group, reports to the Department of Veterans Affairs Veterans Health Administration’s Female Veterans Special Advisory Committee.

Born and raised in Chesterfield County, Virginia, Monaca joined the Army in 2000. Soon thereafter, she began training as a Motor Transport Operator 88M, an opportunity that led to an assignment as a Transportation Instructor at Fort Dix, New Jersey.

Monaca was deployed to Iraq in 2004 and upon arrival immediately began escorting convoys. During a 2005 convoy an Improvised Explosive Device (IED) struck the vehicle directly behind hers. The explosion hit with such impact that the soldier in the vehicle sustaining the direct impact died moments later in Monaca’s arms as they awaited help.

The explosion took a heavy physical toll on Monaca soon after—migraine headaches, blood pressure medication, and pain relievers were now a part of her life on duty and then upon her return to the U.S. a year later. Her eyesight also started to deteriorate and by 2007 it had noticeably worsened. There was suspicion of optic nerve damage caused by Traumatic Brain Injury. She was gradually loosing her vision from the same IED attack two years prior.

“The ways in which those two impacted my life can’t be overstated,” she said. “Along with my faith, my mental health, and the VA blind rehabilitation programs, they let me know that I could make it as a blind single mother and that I could do so many of the things that I loved doing before I lost my vision.”

With a focus on women veterans, Monaca now pays forward what Tom and Danny did for her. Frequently digging out of her own resources, she regularly recognizes accomplished women veterans in her assigned geographical area as well as nationwide. She offers them opportunities to participate in adaptive sport activities and organizes expeditions for them as extreme as hiking a portion of the Appalachian Trail. She is a sought-after motivational speaker and a talented singer.

As we recognize the service and sacrifices of all veterans on November 11 and throughout the month, please support Monaca Gilmore in her mission to now serve her fellow women veterans through the Team BVA initiative and Women Veterans Group. The blinded veterans she inspires and motivates toward a more independent life and a better future depend on your generosity and commitment to give back to them a portion of all they have done for us.