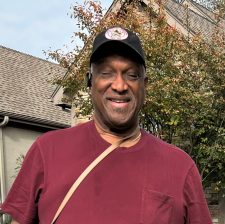 Throughout the year, we look for beacons of light. Whether it’s the symbolic light of kindness from strangers or the light we see with our eyes – from the sun on a warm summers day or from candles on the dining room table at a meal with our loved ones – we look to light as a symbol of hope, love, and guidance.

For Navy veteran, longtime BVA member, and Kansas City, Missouri resident Paul Mimms, the light he sees is the same light he has unselfishly shared for the better part of 40 years and which he continues to share today with his fellow blinded veterans. For Paul, his fellow veterans are also his colleagues, his advocates, and his friends.

Unlike draftees of the 1960s during the Vietnam War and more like inductees of today, Paul actually volunteered for military service, enlisting in the Navy in 1966. His plan was never a military career but to fulfill a commitment and then return to civilian life.

He was stationed in San Diego for a year and a half before his deployment to Vietnam in January of 1968 aboard the World War II-constructed USS Luzerne County, a ship designed to support amphibious (both land and sea) operations.

One night aboard the ship, on the waters of the Mekong Delta only a couple of months into his deployment, Paul had just finished unloading ammunition from the ship when a pulley used to load it into storage swung free, striking his face with force and directly in the left eye.

Dazed and shaken but not unconscious, Paul picked himself up. Although he was alone and only 23 years old, he knew something was not right when a dim light proved to be too much for his eyes. Despite this grim discovery, he was now on a mission and there could be no diagnosis from an eye doctor for four months when the ship was to dock in Guam.

Paul lost most of his sight in the left eye due to the onset of glaucoma caused by the accident. He received a medical discharge and returned to a former job at a Ford assembly plant in Kansas City. Unfulfilled at the job and now aware that he was a people person first and foremost, Paul worked in the retail industry for a time and then worked his way up to a manager position at a restaurant.

“It was at the restaurant that I believed I’d found my niche because I discovered how much I really cared about other people—both my employees as well as my customers on the other side of the counter,” he said.

Unfortunately, the motivation Paul acquired from his success managing people suffered another hit when he experienced symptoms of glaucoma in his previously good eye. He had faced a few safety incidents at the restaurant that he describes as more dangerous than any he’d even experienced in Vietnam. With the realization that he could not fully protect himself or his employees, he felt that he needed to resign.

“When I reached acceptance that my sight loss was actually blindness, I went to bed one night feeling that there was no real reason to get up again,” he said. “I woke up and drank water, used the bathroom, and went back to bed with my whole thought process being ‘why me,’ for three entire days.”

Paul could easily have found a way to languish for years in the same surroundings and mindset, thinking that blindness had become the deal breaker that had ruined his life. Instead, he realized after some serious soul-searching that “why me” could actually be “why not me” with a new personal mission statement that included all the things he still possessed that blindness could not take away from him.

“My mission became one of appreciating and respecting the gifts that I already possessed—to look beyond blindness unless it could be used as an opportunity to help someone else, and to focus on the blessings and gifts I have to empower others just as I have been empowered in my own life.”

Paul said that the gifts he still possessed after blindness were his motivation to become something more than he was, his physical health, his intelligence, his family, and his faith. He views himself “not so much as a blind veteran but as a veteran who happens to be blind, the disability always being secondary to what he does for family, church, community, country, and fellow veterans.

Ever since that momentous realization of his potential, Paul Mimms has developed, cultivated, and then shared his gifts through higher education; working for and directly with blinded veterans at the Department of Veterans Affairs; and as an authority, teacher, counselor and effective communicator in the areas of SmartHome Technology, Information Technology, and Guide Dog Handling and Care.

BVA is one of several benefactors of the light that emanates from Paul Mimms as a gift without a price tag or an invoice. That light is, at least in part, the wisdom and guidance he now shares with BVA as the organization becomes more service-driven, just as he himself confronted his own future and ultimately determined to make service the center of his life.

As we recognize the gift of freedom that America’s veterans have sacrificed to preserve, please consider supporting Paul Mimms and BVA in their mission to enhance the quality of life for blinded veterans through the marvels of technology, trained guide dogs, and effective counseling. The means by which Paul will continue to share the light of his knowledge and understanding with veterans confronting darkness depend on your generosity and commitment to give back to our veterans with vision loss a small portion of all they have done for us.