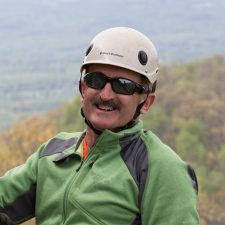 When former Navy Petty Officer, now extreme sports athlete, Lonnie Bedwell had his sight unexpectedly and suddenly taken from him in 1997, hardly could he have envisioned at the time successfully raising three daughters as a totally blind single dad.

Raising 3 beautiful daughters he says, will always be his greatest accomplishment and most cherished one. Nothing else could match it.

As his daughters were growing up and moving out on their own, Lonnie was not about to drift into relative obscurity in his small hometown of Duggar, Indiana. He still had more to do, seeking additional ways to make his own life better and perhaps, in the process, help change lives for others. After all, Lonnie’s life had always been about service in one way or another.

In seeking those future opportunities, he began planning and subsequently doing things he never dreamed were possible without sight. Then he shared those plans and experiences with others, among them some of his now closest friends.

The idea for Team BVA, an activity-based initiative of the Blinded Veterans Association, was inspired by the courage, determination, and passion of Lonnie Bedwell and a cadre of other blinded veterans like him who continually, and somewhat subconsciously, always put others before self.

Although the Team BVA motto—”One Vision, One Team, One Fight” has always been a personal mantra of Lonnie’s, he now puts it into practice like never before in serving his fellow blinded veterans.

Lonnie did not receive any formal blind rehabilitation training for 13 years after his sight loss. In 2010, he finally reached out to the Department of Veterans Affairs (VA) after learning of its residential rehabilitation programs. The closest one was the Central Blind Rehabilitation Center (CBRC) in Hines, Illinois, just east of Chicago. What he hoped for were a few high-tech gadgets and a couple of weeks of practical training that could help him in his daily life.

“The real help I ended up getting at Hines was of the human variety and the beginning of the next and most incredible stage of my life,” he says. “I plugged into an amazing network of really wonderful people, including many associated with BVA who would launch me into my top tier adventure.”

That adventure was kayaking the 226 miles of the Colorado River stretching through the Grand Canyon. As the first blind person ever to successfully do so, Lonnie was awarded the National Geographic 2015 Adventurer of the Year. His other adventures include rock climbing and downhill skiing for which he has also been recognized. Because he prefers not to be defined by his blindness or limit the type of activity in which he engages, he shares his experiences widely and applies them to any and every type of endeavor. The news and impact of his adventures have reached and inspired literally thousands.

“My strength and my joy now come from those who haven’t yet experienced what I have but who are yearning for either the same or something like it,” he explains. Lonnie coordinates kayaking, skiing, and climbing trips for Team BVA as he simultaneously plans his own climbs of Mt. Denali this upcoming November and Mt. Everest in mid-2023. His fellow veterans remain his main concern during the challenging COVID-19 pandemic era that has restricted activities and the opportunity to follow Lonnie’s lead and direction while participating in them.

I hope Lonnie’s story will inspire you to give back to our blinded veterans who gave so much for you and our country.

Please consider a gift to BVA in honor of Lonnie’s extraordinary courage, selflessness, and drive—and to support him in his efforts to share those qualities with his fellow blinded veterans through upcoming adaptive extreme sports adventures that will forever enhance and make their lives better.