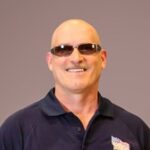 LDRSHIP. It’s not a misspelling but an acronym for Loyalty, Duty, Respect, Selfless Service, Honor, Integrity, Personal Courage—values of the United States Army to which Master Sergeant Eric Marts of Moorhead, Minnesota first committed himself when he enlisted in the Army National Guard in 1985.

Today, more than a decade after his Army service and a devastating Traumatic Brain Injury (TBI), those same values remain firmly rooted in who Eric Marts is and what he does.

On May 11, 2006, a roadside bomb hit Eric’s unit while on patrol outside Fallujah. He was a considerable distance from the explosion, but its impact was powerful enough to knock him off his feet and onto his back. He wasn’t hurt that day, or so he believed. He got up and went back to what he was doing.

“I did what one does as trained military personnel,” Eric said of the Improvised Explosive Device (IED). “You get up and keep going without complaining, especially when you see others around you losing limbs or being severely burned.”

Within a few days of the explosion Eric began having trouble seeing clearly out of his right eye. Doctors told him his vision would likely return as they studied test results that revealed nothing. Back then, the correlation between TBI and optic nerve damage was not as firmly established as it is in 2020.

Fast forward five months and now eight IEDs later. Eric had lost most of his vision in his right eye and was now having some trouble with his left eye. He wore a patch over the right eye so that the blurred vision would not interfere with the still better vision in the left one.

An Army regulation stating that 50 percent vision is enough to stay on active duty allowed him to convince commanding officers and medical personnel that he could stay. Only when Eric began experiencing a sure loss of vision in his left eye did he come to terms with the possibility of leaving.

“The hardest thing through all of it was the realization that I wouldn’t be with my guys anymore and could not go back to them,” he said. “I had to fight the feeling that I was abandoning the family with whom I had trained, fought, and put my life on the line.”

Such was the level of commitment of Master Sergeant Eric Marts throughout his Army career. He demonstrates the same commitment today as a local radio talk show host on veterans’ issues, a spokesperson for veterans in the U.S. Congress, and an advocate for housing improvements for disabled veterans.

The Team BVA initiative of the Blinded Veterans Association provides Eric with still another vehicle and forum for supporting his fellow veterans as they adjust to life after blindness. He engages with them in adaptive sports activities, serves as a voice for them in his community and nationally, and counsels them one-on-one. His commitment brings light to lives that would otherwise remain dark.

Please support Eric Marts in his commitment by donating to the mission and activities of Team BVA and the blinded veterans he supports and inspires through his LDRSHIP. Eric and the veterans whom he strives to serve depend on your generosity and support as they work toward leading an independent life with a bright and hopeful future!